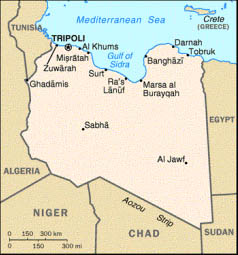 My mother Val was kind to mail Cindy a stack of recent New Yorker Magazines. Included in one May issue was a long story by Andrew Soloman called “Letter from Libya.”

In this barely functional desert country people work five mornings a week. Few work more than this, and many, about 30%, don’t work at all. The state’s oil riches subsidize an economy where bread sells for two cents and gas for pennies a gallon. Soloman talks about what Libyans enjoy doing: long rides on the highways, cruising all hours of the night; house parties with mint tea and hookahs, and he relates the terror of driving in a land where no one pays any attention to traffic lights, stopsigns or other road rules.

Soloman talks about the Roman ruins, gorgeous classical amphitheaters and other buildings, pristine, yet totally filled with trash. Everywhere, he said, there is litter; as if the people under the control of the “Leader” as Qaddafi is known, rebel against his harsh rules by throwing trash around.

The Leader, (also referred to by pointing an index finger skyward,) once outlawed SUVs, then, said they were ok. Rich Libyans went out and bought them, only to be told a few years later, they were once again outlawed. “You hear talk about rusting SUVs sitting in garages when you speak with the upper class,” the author said.

Qaddafi has been harshest on the islamic militants who threaten to rally and create the kind of problems seen in other countries with large numbers of unemployed young men with nothing to live for. He has outlawed their associations but with 50% of the country under age 17, no one knows what the future will hold here.